Emotional intelligence has grown in popularity and implementation over the last three decades. It is now agreed that having a strong emotional intelligence, (sometimes referred to as EQ or EI,) is very important. Unfortunately, it is not something we are usually taught at school. 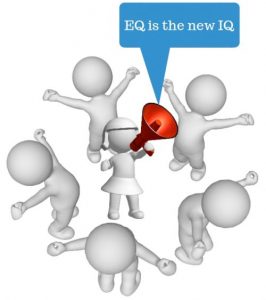 Who coined the term Emotional Intelligence?

The term emotional intelligence was first used by Jack Mayer and Peter Salovey in 1990. They created the term and the EI theory. They defined it as:

“the ability to monitor one’s own and others’ feelings and emotions, to discriminate among them and to use this information to guide one’s thinking and actions.”

They demonstrated how emotions could impact the behaviour and thought process of an individual.

Later, Mayer gave Harvard Business Review a refined definition…
“From a scientific (rather than a popular) standpoint, emotional intelligence is the ability to accurately perceive your own and others’ emotions; to understand the signals that emotions send about relationships; and to manage your own and others’ emotions. It doesn’t necessarily include the qualities (like optimism, initiative, and self-confidence) that some popular definitions ascribe to it.”

Since then, experts in the field have continued to build on that theory in a bid to refine what really lies at the core of EI. It isn’t just about knowing what emotions you are experiencing. It’s also using those emotions to inform your thought process and in turn, using your thought process to inform those emotions. It is all about having a keen awareness of how your behaviors and decisions are driven by your emotions.

In 1995 Goleman wrote a best-selling book on emotional intelligence called, “Emotional Intelligence: Why it can Matter More than IQ.” He predicted that EI is a higher predicator of success than IQ. He has contributed extensively to the study and understanding of EI, having authored and co-authored a number of books on the subject; including “Working with Emotional Intelligence” in 2004.

Some references to Emotional intelligence

Goleman stated in an article for HBR (What makes a leader,) “The most effective leaders are all alike in one crucial way: they all have a high degree of what has come to be known as emotional intelligence. It’s not that IQ and technical skills are irrelevant. They do matter, but…they are the entry-level requirements for executive positions. My research, along with other recent studies, clearly shows that emotional intelligence is the sine qua non of leadership. Without it, a person can have the best training in the world, an incisive, analytical mind, and an endless supply of smart ideas, but he still won’t make a great leader.”

In an article posted on The Huffington Post, Dr. Patty Ann Tublin says, “arguably, a high level of emotional intelligence trumps a high level of IQ every time. No one really cares how smart you are if you cannot get along with people. If people find you to be abrasive divisive and/or obnoxious, your career and business will take a direct hit as a consequence of your behavior. No one will want to work with – or for you. You’re not that smart that people will be willing to tolerate you making them feel miserable, stupid, and angry or any other negative emotion(s) no one in their right mind wants to experience.”
She also wrote another article on 3 ways to increase your emotional intelligence.

“Emotional intelligence is being smart about your feelings. It’s how to use your emotions to inform your thinking and use your thinking to inform your emotions. It’s having an awareness of how your emotions drive your decisions and behaviors, so you can effectively engage with and influence others. Individuals who are emotionally intelligent tend to be empathetic, can look at situations from an alternative point of view, are considered open-minded, bounce back from challenges and pursue their goals despite any obstacles they might face.”

Regardless of job title, bank balance, gender, race etc. Every person has worth and should be treated with dignity, respect and understanding. No one is above or below anyone as a human being. Increasing your EI will create better social and business interactions. Leading to healthier, more effective, compassionate, empathetic relationships with yourself and others. Surely that can only benefit everyone and the world as a whole.

If you would like to find out more about how you can increase your EQ, please feel free to reach out. We are always happy to help.
Also, please like and share this article below so others may find benefit from it.