How does the gastric band surgery work?
This is a restrictive surgery. That means it reduces the size of the stomach and thus restricts the amount of food the person can consume, before feeling full. In essence, a band is surgically placed over the top part of the stomach to make it smaller. By not over eating, the client would feel full sooner and should lose weight. 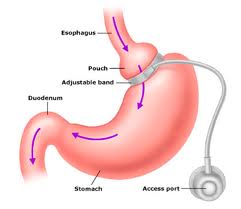 After having gastric band surgery it takes some adjusting to get the band to the right size for you as a client. You may also need to have the band tightened as time goes on and you lose weight. Having it either to tight or to lose can both have negative consequences in the success of the procedure and the outcome. There are also some potential complications with the surgery as there are with any surgery. There have however been hundreds of thousands of gastric band operations performed around the world to date.

What else is involved in gastric band hypnosis process?

The whole process is a three part system.

– We first start with a one hour virtual call via Zoom or Skype. This is to understand any underlying reasons for over eating and gaining weight. Dealing with the root problems that the client may have for over eating. This includes using techniques in NLP, Time Line Therapy® and coaching to help you change the way in which you look at food and exercise. You will let go of any limiting beliefs and negative emotions you may have had. Then we set agreed achievable weight loss goals in your future for you to accomplish.
An analogy is the garden weed and how stubborn it can be to get rid of. If you only pull out the visible weed and leave the roots behind, then more often than not, the weed will grow back. Often when people go on diets they lose some weight, only to put it back on again with interest. Don’t be one of those people any longer. Get the help you need with your weight loss journey. Shed the pounds and keep them off.

– Then you receive the 6 gastric band hypnosis audio files that you can listen to in the comfort of your own home. Whilst listening to the audios, the client receives suggestions to believe they have a gastric band fitted.

– Then we finish with another one hour virtual call to wrap things up. Discussing dietary factors and exercise, as well as gain an understanding of your desired weight. Also how to achieve and maintain your desired and achievable weight. This in turn will have a positive and empowering effect on your life, helping you to be more confident and successful in other areas of your life.

There are over 300 million obese people in the world and this figure is climbing fast. With the US and UK on top of the list, health problems are on the increase and are going to get much worse if we don’t start losing weight. Albeit there are some medical conditions that can cause a person to put on weight, most people are obese from just eating too much and not exercising. We are living in a fast food and “I want it now” society. Fast food is everywhere and many people think it is easier or cheaper to buy fast food than to prepare their own meals.

To stay healthy you need to look after your health and that includes controlling your weight. Eating healthy can be as fast as and much cheaper than eating junk food. There are plenty of healthy options around that can be whipped up quickly and easily. With a bit of time management, there is also time for exercise. Regular moderate exercise combined with a healthy diet will already change most people’s health for the better. Do yourself the courtesy of being healthy. Live longer and be around for your family.

We are here to help you on your weight loss journey. The best time to start is now. You will feel healthier, happier and have more energy.