Emotional independence relates to how reliant someone is on others in various areas of their life. Can they plan, make decisions and act autonomously, or do they need help and support from others. Being emotionally independent does not mean being alone or never needing anyone else. It simply means that one does not need external validation or evidence to know that you are doing well. It is about building on your own self-worth and not needing it to come from other sources.

“To thine own self be true.” – Polonius to his son Laertes

People who measure higher in independence tend to be:

• Confident and feel that they can make important decisions by themselves.
• Self-directed, self-determined, and decisive in their decisions and behaviour.
• Happy to listen to the opinions of others and receive help, but do not feel reliant on this in order to move forward with an idea.
• Free from emotional dependence. They don’t allow their own emotions or that of others to control what they do and how they behave.
• Can set and achieve goals by themselves. 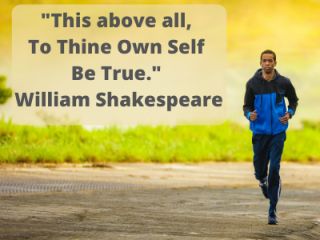 People who measure lower in independence may appear to be:

• Indecisive and struggle to make decisions on their own. They often need someone that they can rely on.
• In need of protection and support in everyday life.
• Uncertain and lacking in confidence in themself.
• Prone to allow others to make the final decisions on projects.
• Lack assertiveness.

Being independent allows someone the ability to do the necessary tasks, without help or the need to be overseen. The right balance of dependency in a team allows for sufficient autonomy and collaboration where necessary. Allowing enough freedom to get the job done in the most efficient way, without needing to micromanage. Independence does not mean one has to do things in isolation or being on your own. It still allows one to be a valuable member of a team even if you are working alone.

Impact In The Workplace

Independence in a team allows for members to work on their own, as well as be being part of a team. They are confident and happy to share ideas with the rest of their team. Not afraid of being judged on their thoughts and efforts.

If given a task, they are happy to do it alone, but if they experience any difficulties, they will happily ask for and receive help. Although they may try to problem solve by themselves first, it will not be because of vanity and not to the detriment of the project or team.

People who are more emotionally dependent may be very good at their job. However, they may lack in confidence and continually seek for external verification and validation. They may struggle to make decisions by themselves and be self-directed.

This could be an energy drain on the other members of the team. Potentially even lead to problems like resentment or feeling that they are ‘carrying’ their colleague. Resulting in a less cohesive and productive team.

Imagine a team that is made up of largely very dependent members. One would potentially have to micromanage a lot. This also drains the energy of the manager as they consistently have to keep the team “going” rather than focussing on their own duties.

Of course, as with any trait, one could be excessive either way. Someone who is in the very high range for independence and very low in interpersonal relationships, may not even consider the thoughts and feelings of other team members. They could be overly dominant, and they may struggle to collaborate with others.

An overly independent team member may even struggle to take direction from leadership. So focussed on what they believe is right and they may not take feedback to improve to heart.

An ideal team may be made up of members that have the ability to work both independently but also as a team where necessary and appropriate.

“Men are not prisoners of fate, but only prisoners of their own minds. They have within themselves the power to become free at any moment.” – Franklin D. Roosevelt

E.g., Imagine a leader who needs to make decisions whilst potentially second-guessing themselves. They may get so caught up in the internal struggle, that they are paralysed to make those decisions. A good leader needs to be able to make decisions, even in the absence of certainty. They then also need to accept responsibility for whatever the outcomes are of their decisions.

Independence can generally be viewed as a good quality for someone in a leadership position. Leaders and managers need to be able to be self-directed and confident. People need management who are confident in the direction they are taking their team and seen to be the person to be relied upon when necessary.

However, it is important that leaders are not overly independent and run away with projects leaving team members ‘out of the loop’ and unsure which direction to follow.

Leaders who are overly dependent traits may struggle to properly lead their team needing ‘hand-holding themselves.’ This could potentially lead a team to flounder with no real leadership being given.

As we have seen, independence plays a very big part of any team or leadership position.

To understand where one sits on the scale, and how to be effectively and appropriately emotionally independent, it is important to take a scientifically backed emotional intelligence assessment. This will help one to understand where you are currently with each of the 15 subscales that we are discussing in this series of articles.

We can then work together to increase the specific areas that you feel will have the most immediate and positive impact in your life.

The emotional intelligence assessment is done online and followed up with a face-to-face coaching session, which can be done via Zoom or in person. Working on one’s EI can lead to significant positive results in all areas of life. Not only making one over all happier, but more effective and approachable. It all starts with a simple yet immensely powerful online assessment.

To find out more about how your organization can benefit, contact us today for a no-obligation conversation.